I would like to collect opinions on 4v4, especially if you have played a tournament using this format.

I played about 3 fun tournaments with abcd teams and one serious tournament. I found it quite fun in all cases. We played with live switches, but I would also like to see how it would be with switches only during stoppages. Game length was usually 16-18 minutes, which is a good length in my opinion. In general, it is not a big difference to 3v3 and to squad. It combines the best of both workds if you ask me.

In June there will be the first test in a major tournament in Lyon. I would really like to get lots of opinions from there, since I am not able to go there.

We played SLAM tourney in Zurich in 2021, was great. Maybe @BigTableManners and @Woods could share his thoughts too.

Few of the subjects is see that you also bring in your post:

a.I think it was 20min but i’m not sure, 18 min seems fine.
b.Clock was stopped only in the last 2 minutes of the game.

I think in Lyon there’s will be no clock stoppage to keep the schedule straight, i think it will be fine, and a good test too. Clock only stop and big shit of course, which are in majority the cause of big delay anyway, will see.

So my though is that it should be always dead-switch, for consistency ?

I also think it would be better for consistency. But in every test I played, they had good doors and did live switches. Would be good to really test without live switches. Also if clock keeps running, one would need a way to enforce a switch. How much time can it take?

How much time can it take?

If the “reasonable” time is due assistant count down 10 sec like after a goal / stoppage “to be ready” ?

If the “reasonable” time is due assistant count down 10 sec like after a goal / stoppage “to be ready” ?

What if the court is plywood and the only door is at the corner which has to be dropped to the ground and lifted up. 10s sounds very short in that case. 20s maybe?

What if the court is plywood and the only door is at the corner which has to be dropped to the ground and lifted up. 10s sounds very short in that case. 20s maybe?

Mmm indeed…
I guess it’s a bit of a stretch to me: if the tournament is planned as 4v4 the door(s) has to be designed with that in mind (hinges, two doors, etc) but:

I’d say, after a stoppage teams must announce the switch within reasonable time, like 5sec or must follows the foult called by the ref. Then switch happen immediately within the next 10 or 20 sec.

Maybe a 30 sec maximum timer after stoppage could do the trick.
Like it’s in captain/team mind that after the whistle they have these 20-30 sec to ask and do the switch.
Like if your player haven’t fully switched within this duration you get rewarded by these consequence (for example):

I’ve played a couple of 4v4 tournaments, and while I think it’s kind of neat, why not just have a full squad? 4v4 feels like 3v3 but with a straggler. Would rather be able to make most of a line change. Just my opinions.

I guess I prefer 3x3, the switches are a bit awkward for me. But maybe I have to learn how to deal with them… We did a couple of tournaments with 3+ players in a team over here and everybody had fun

From an organizational point of view, it also allows for more flexibility when someone is late or needs to work or whatever, which would not be the case in a “serious” tournament, right?

I can’t really say much about 4v4 vs squad, as for me it kinda looks the same with a different number of players - categorizing in my mind as either “3v3” or “with substitutions”. Practical considerations like reffing/timing overhead and door locations are maybe more important than game dynamics?

Also, why is this a “megathread”?

From an organizational point of view, it also allows for more flexibility when someone is late or needs to work or whatever, which would not be the case in a “serious” tournament, right?

Especially in a serious tournament there is nothing worse, than having an injured player or a player being late or having to cancel on short notice. It means you need a last minute sub or you cannot play at all. This is one of the biggest worries some players have before prestigious 3v3 tournaments. 4v4 largely removes this worry.

There are positives and negatives with all formats. So don’t really want to get into the nitty gritty.

My main concern is how would a switch in format effect the community as a whole?

Especially because the move to squad by NAH in 2017, has had (imo) a divisive legacy.
IIRC the format change was justified by an ambition to promote polo to corporations and sports broadcasters. However, we have seen little returns in that regard, and although there are some positives to squad it has also resulted in different regions playing different formats and a fair few teams / individuals losing an interest in the sport / competing.

I think therefore the question needs to be would moving to 4v4 be good for developing a competitive culture in bike polo [1]? And secondly would it help to promote the sport to the wider public [2]?

Regarding 1, I don’t think a move to 4v4 is likely to harm the competitive culture.
Primarily because I think that (for a variety of reasons) the competitive culture of polo has been struggling recently and now we have only a handful of established teams competing regularly.
However, it is possible that a fancy new format will galvanise teams to form and at the very least I hope that it would bridge the divide between the regions that favour squad and those that prefer 3v3.

Regarding 2, the old ideas of getting polo on TV seem antiquated to me now. I think that beyond the grass roots engagements with the public, the community should be focusing on content for social media and tournaments that can happen in high profile locations / events.
That all requires a lot of organisation beyond simply picking a new format…
That said, would 4v4 be compliant with promoting the sport? I think so!
With fewer teams than 3v3 tournaments it would be easier to host big events with one or two courts and with shorter games than squad tournaments the action will (imho) be more frenetic and exciting while also preventing stoppages in play.

In short, I think a move to 4v4 is unlikely to do any harm to the sport.
But I do think if we want to move to 4v4 in order to make substantial positive changes, then we have to ask ourselves if we are motivated do more than simply change the format?

Closing out my sermon here

I’d like to end on this note (to self), that whatever happens in terms of format, organisation etc… let’s try and not get too partisan about it - at the end of the day we are a bunch of amateurs that like to ride around in circles and hit balls with sticks x 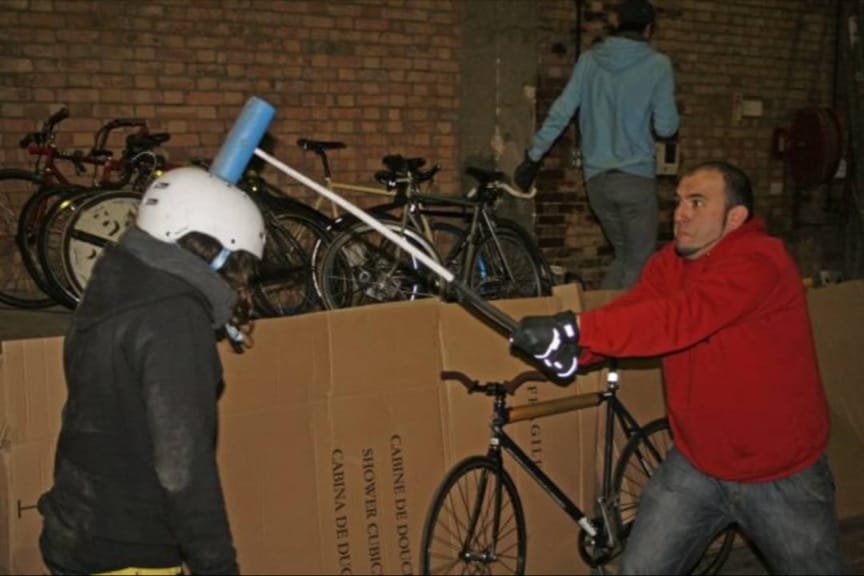 As Big Rik from the Rotten Apples said, polo’s all about the “Maximum Damage and Minimum Scandal”

Any feedback from the Lyon tournament?

Would suggest that timeouts should be shorter, cos more called than normal and 2 minutes feels too long (especially now mechanical issues are not such a big deal with the extra player)

2 min timeouts in this 35degrees oven was not too bad, i should have used them more to get the team back on track but i couldnt think straight 🫠

hold up a sec big boi, while we’re talking about staying on track let’s not forget you played the entire 4v4 tournament on a 3 person team.

a few teams played with -1 , due to easyjet canceled, covid or sickness.

id say the format should be open to 5 players team anyway, as long as the games remain the same its up to the team to manage their five, four or three players.

Unfortunately the feedback survey after Lyon tournament has only been completed by 13 players (around 17 if we include the non written discussions).
On my side, I do like 4V4 for many reasons (already discussed there):

Until know, I’ve played WHBPC 2017, “French Clubs Championship”, Toronto tournament and Lyon tournament with a 4 players team and loved it.

I was excited for a minute.