Custom dropouts for converting 700 rear to 650

A while ago I designed a custom dropout so that I could run a 650b rear wheel in my Medium Lightfoot V3. In order to maintain the bb height obtained by using a 700 rear wheel, I had to add 20mm to the rear axle height. After a bit of clearance testing with a 3D printed prototype, I had 5 sets of the dropouts made and I’ve been using a set for almost three years without incident.

I have given the other four sets to other riders but so far only one has built them into their setup. They love the result.

I’m just putting out feelers as I’m considering having more made and was wondering if anyone would like to jump in on the order. I’m expecting them to cost around USD$80 for the pair including shipping.

I’m certain they will fit all lightfoot v3 and am happy to chat directly with anyone who wants to try them with another frame to check compatibility.

Here are some pics and drawings. 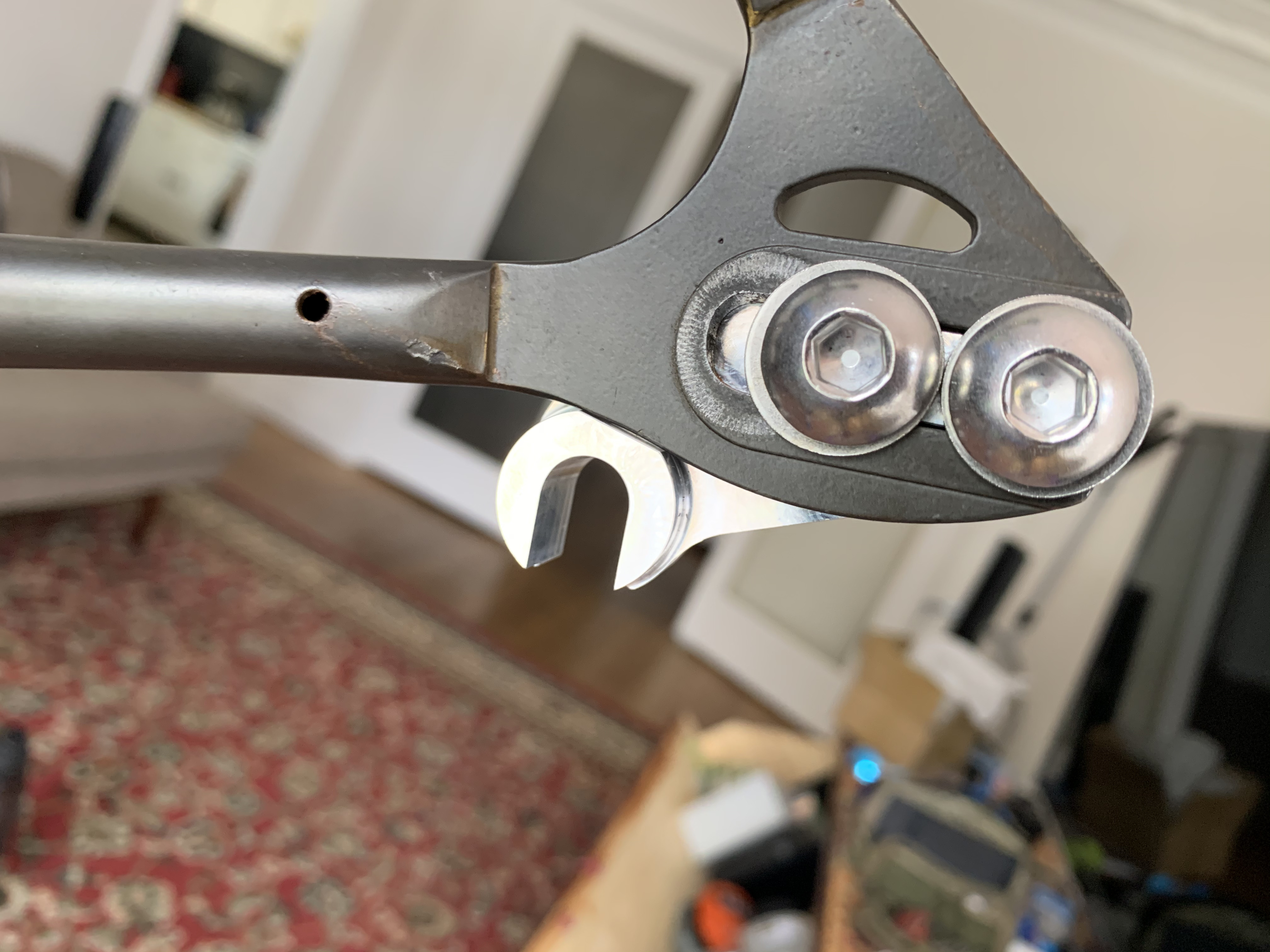 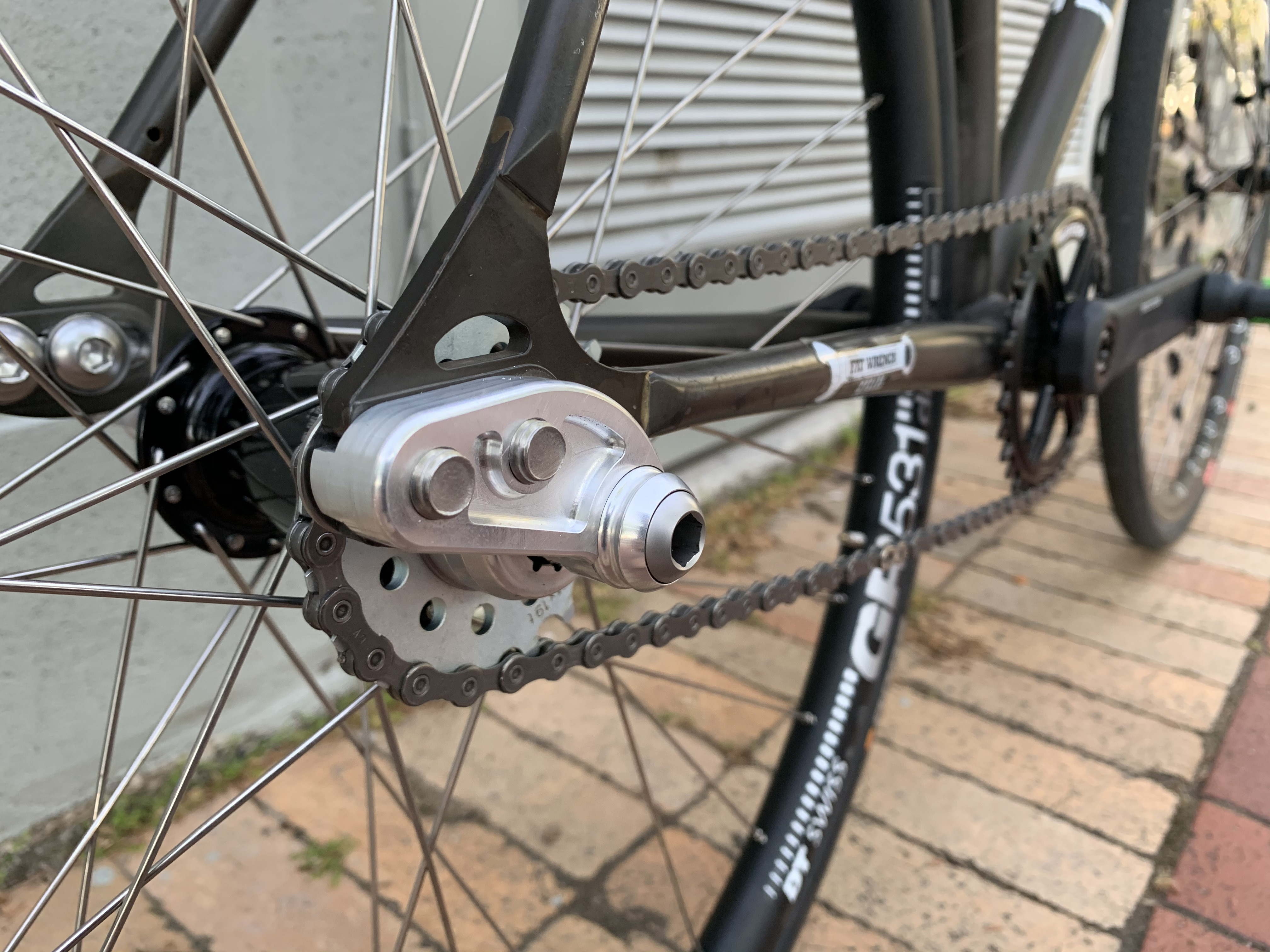 Hey!
Dunno if you know but the guy behind Roger bike polo is a machinist, he makes the head and the connects by hand and can maybe handle shipping etc through Roger Bike Polo! (His english isn’t perfect but I can help).

I like this idea, but I’m curious. have you noticed a difference between 650 and 700, beyond the reduction in gear inches (assuming that you kept your drivetrain)?
does it handle differently than it did with 700s?

Changed the drivetrain to maintain gear inches as best I could.

Moving the axle forward and down 20mm made quite a difference. I’ll try to explain.

When I first designed V3 it was because I had a V1 small lightfoot and I was losing rear-wheel traction occasionally when I transitioned very quickly from a nose to tail pivot. It would force me to foot down as my feet would end up at 6 and 12 o’clock; dead in the water. The V3 medium is an exact copy of my small V1, coupled with a Max power fork that I was riding at the time, with one change; bb position. My thinking was that if I moved the bb more rearward, but maintained the same wheelbase, it would increase my rear wheel traction. Plus, it would have the bonus effect of increasing my toe room so I could slide my cleats back in my shoes. So, in truth, V3 is just a V1 with the bb moved back 23mm, which is a lot I now realise…

The bb move definitely had the desired effect but as a result of this increase in front-centre distance (bb to front axle) my front wheel felt like it was glued to the ground. Think of the difference in difficulty between doing push-ups on your knees vs your toes. The longer the front-centre distance the more force is applied down on your cockpit and front wheel.

Front wheel weight is a huge part of what makes hard turns possible without losing traction so the bike handled incredibly well at speed but the downside was that it felt hard to pivot. First thing I did to try to ameliorate this was lift my cockpit. I ended up grabbing the stem off my 26" trials bike which is 120mm 20 deg. I still ride this cockpit today. I may even lift my cockpit higher in the future.

As I got more used to the bike after a year or so I came upon another slightly negative consequence of moving the bb back. Perhaps it’s better to call it an intuition because this one is a little more complex to explain and Im no physicist. Having my feet more underneath me, rather than out in front, was making it harder to shift my weight back over the rear axle. Think about it this way - if you are standing with feet planted shoulder-width apart and your feet are directly under you while holding handrail at waist height then squatting does little to pull the rail toward you. The closer you put your feet to the rail while maintaining your original shoulder position, the more you ultimately pull back on the rail when you squat.

It might sound strange and counterintuitive to say that moving my bb back gave me more traction but stopped me from shifting my weight over the rear, which seems like what defines traction. Those statements seem to contradict each other. Someone who knows physics can probably explain this better; “something, something, non-linear”. Anyway, point is, I imagined that if I could lower my axle and tuck my rear wheel in then it might be easier to shift my weight over a pivot point that was lower and closer to the bb, all other things being equal.

I have to say that the outcome was exactly what I’d hoped for. It did all of the things I wanted with zero downsides. My bike came alive. Way easier to transition to rear in stationary pivots. I don’t feel any change to my steering or traction when moving riding at speed and I’m much more nimble in hopping and pivoting. And to be clear, I’m still running a 700c front wheel. I can’t see any reason to change and in fact have good reasons to stick to 700 front; bb drop, taking up more space in goals…

Anyway, hope that made sense. My bike looks weird af but it rides almost exactly how I want it to now. Almost… ; )