What would you call?

Here is a tricky situation last weekend, I was the ref. It is the only call in the video I am not sure about. Orange player (Dani) gets potentially toppled by black player (Morgan). There was no call and I had a direct and clear view of the situation.

The situation as seen in the video is the following: Pass comes from the left to the top of the crease. Dani wants to shoot. Morgan rushes out and deflects the ball and starts turning towards the ball, which stays in his vicinity. Morgan per definition is now the ball carrier. This happens before any bike contact is made.
Dani keeps riding in a straight line and gets into contact with Morgan. Morgan potentially gives a little impact to Dani, who ultimately dabs. However, Dani does not seem to slow down in the whole process and potentially also carries momentum into ball carrier Morgan with his foot/pedal, while Morgan is able to keep his balance. It actually seems as if what really brings Dani out of balance is the final contact he makes with the pedal on Morgan’s front wheel, which is at rest.

As said, I did not see clearly that either of the two players was at fault, also given to very short time for either of them to react. It is even not clear to me re-watching it, so I would still tend towards not calling anything.

Here is the video, I recommend watching at 0,25x speed and pause it a lot! 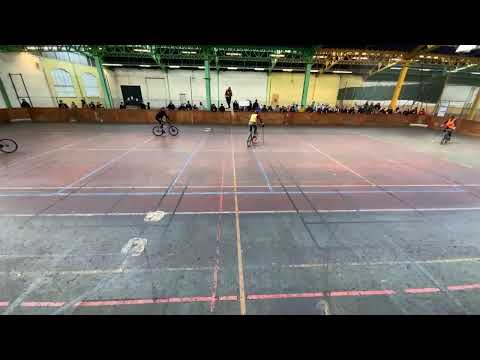 i’m an angel, i have never made any foul, only bad judgment

I can’t see if Morgan contacts the front wheel of the player in the orange vest. The player in orange does seem to be impacted but maybe he’s just been taking acting lessons.

Oh I see your point after rereading. I think that the tolerance for interfering with someone’s front wheel with your pedal has to be pretty high as a ref unless the player being intersected is dead still. It’s a grey area but I give the benefit of the doubt yo the orange player in this case and call a bike handling penalty/t-bone/bike on bike contact infraction on Morgan.

More philosophically, if we start calling these then front wheel blocking peoples pedals will become a thing and that isn’t an arms race we want to start IMO.

Pedal contact is not a gray area at all:

6.2.3.1.1 A T–bone bike contact infraction is called when a player initiates contact with an opponent, carrying momentum with their wheel or pedal into the opponent in the direction they are traveling.

More specifically, it’s grey as to whether I’ll make a call. I believe the use of bike handling penalties is currently understood as a way to rectify a disadvantage brought about by the bike contact in question. There are many kinds of incidental contact that occur that fall within the domain of some bike handling infraction but are nonetheless ignored.

I’m very unlikely to make a call against a player if their opponent has ridden into the path of their pedal in the absence of any ability to get in front of their front wheel. I think this is the convention despite their being a rule that contradicts it. If the player in question is stationary and their opponent makes pedal contact I think that I would be more likely to make a call. I’ve often wondered if this should be made explicit in the rules but as far as I know there isn’t anyone who uses this tactic in such a way that would require being more specific in order to deter such a player. The ambiguity/current convention seems to function sufficiently at this point in time. At least from where I sit.

I hope that makes sense.

From this angle I see Morgan carrying momentum into the orange player causing the orange player to dab in which case I would call a T Bone on Morgan. If there was a close up/different angle that would clearly show that Morgan did not initiate the contact and that the player simply caught his pedal on Morgans stationary front wheel then there is either no call (incidental) or the possibility of an advantage call to the Black Team.

I also see an obstruction from the player in black with the white helmet at 34:35 coming out of goal when Morgan has possession.