A shot hits a dead defensive player in the crease

that happened last week end in Berlin Mixed, I was @Cleftintwain assistant and we both agreed to give the goal… but a lot of pple was not OK with that decision, even the offensive team…

So, dead player in the crease, a goalie was already in but a shot from the offensive team hit the dead player, we granted the goal regarding to

7.5.2 A shot that deflected by a dropped mallet, dabbed player or shifted goal that would have otherwise crossed the entire Goalmouth Line will result in the Main Referee awarding a point to the team that made the shot.

What do you think ?

The alternative was 30 seconds. I can see the other side of the argument.

i’m still considering we did the right choice

Saw it and would have given a goal as well.
In that scenario the call has to be in the favor of the offensive team, IMO.

Advantage + 30sec seems like a valid call as well.

I mean there was a goalie in net that probably would have blocked it, the dabbed player had nowhere to go, and was exiting the play in an appropriate manner. I don’t get why a 30sec would be warranted. Different story if the goal was open.

Let’s say the shot had 50% of success with the goalie in :

@LaPassoire because it’s cluster cuss play, the shooter saw the dab and decided to shot on them anyway. I mean the penalty for a dab is tapping back in which they where doing, I don’t think we should have different rules for where you dab.

The rule is vague here, mostly because in the usual scenario the dabbed player in the crease is also the goalie.

The very least has to be a 30s penalty for an infraction in the crease, preventing a clear scoring opportunity. An awarded goal to my understanding should rectify a certain goal, not a probable goal.

So I would tend towards 30s penalty but no awarded goal here unless it was clear, the goalie’s wheel was not in the trajectory of the ball and they would not have been able to react. It does not look to me like this was clearly the case.

The only other scenario where a goal is awarded is on fouls on scoring attempts on a completely empty goal, but never on a live goalie.

look at the video ( 9:26:19 - youtube offers 0.25 play speed) we clearly see Markus shooting under 2 bottom brackets, if Bouchard did not move, it’s a goal

I did (on my phone), it’s not so clear to me, but that doesn’t mean it cannot be clear to the ref, assistant and goal ref who were there… 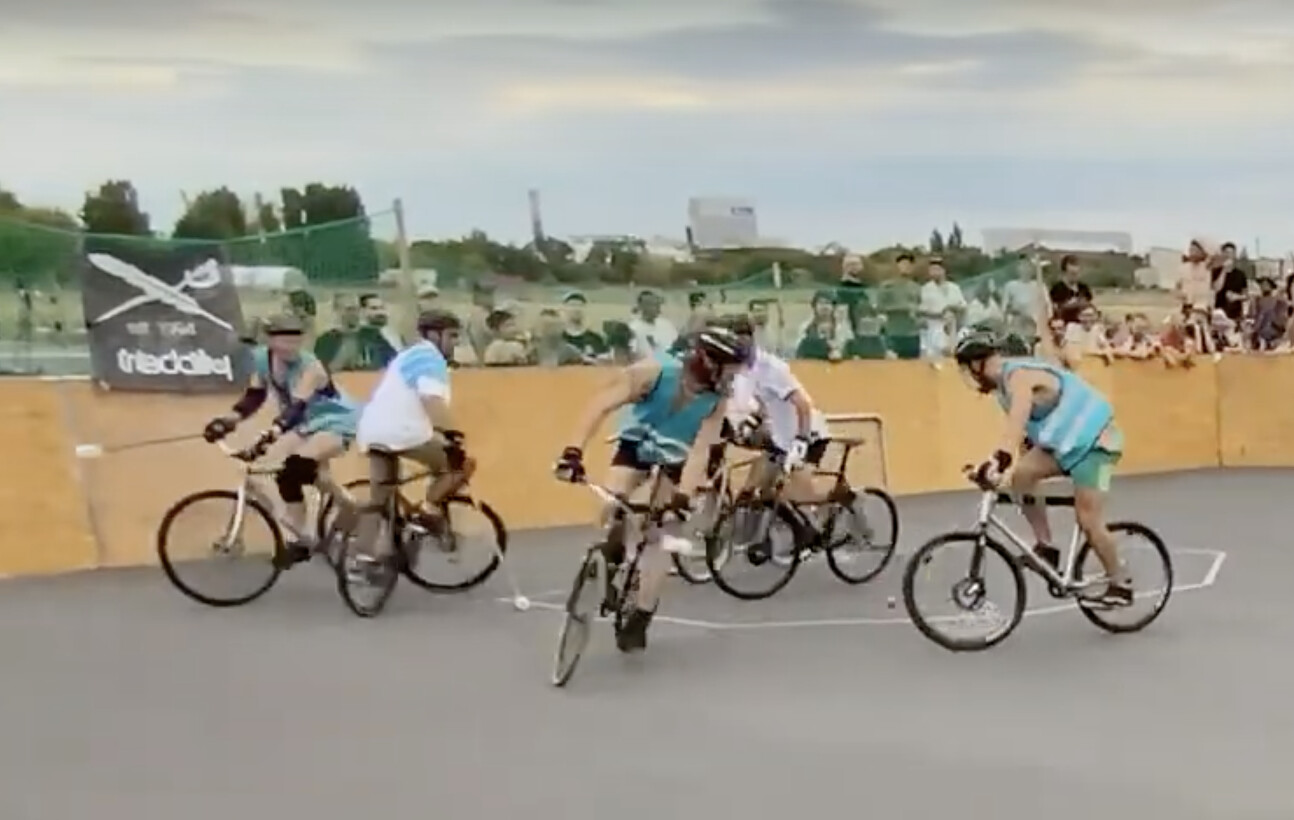 If you are certain it was a certain goal I would not argue against it.

1st : incredible sport attitude from Eliska, Markus and Leon. I don’t know if i’ll have the occasion to give them back such a move except by saying thank you again.

Then I read a few things that I cannot understand :

I don’t blame anybody and in my position it’s hard to say i have a neutral point of view and maybe the call was right. But to me it’s not and we need to work on that rule (and just to avoid to have people stating to shoot on dabbed players as soon as they are in the crease).

6.2.1.5 A dabbed player is considered out of play and cannot interfere with play by using their bike, body or mallet to impede an opponent from making a play on the ball or Ball Carrier.

6.2.1.8.1 The Main Referee may issue a penalty if a dabbed player interferes with the game play in a way that results in an advantage for their team.
6.2.1.8.2 If a dabbed player blocks a shot on their own goal that would have otherwise crossed the Goalmouth Line, the Main Referee awards a point to the shooter’s team as per 7.5.1.

Plenty of reasons to have exactly 2 choices here:

If you dab in the crease in front of a shot, well, that’s your problem. With your argument (where should I go?) but without a player behind you, you would sound ridiculous. You shouldn’t dab in that situation, that’s your answer. If you are dabbed you are out, immediately. You do your best not to interfere, fine, you should. If you block a shot it’s a major advantage for your team that has to be sanctioned. This is a fundamental principle as old as the game

TIL always shoot on a dabbed player in crease.

Danke !
It’s more clear now :).
Considering this, 30sec for me was the only option so I can consider myself as lucky (even if luck doesn’t exist in bikepolo

).
I hope it won’t result in players waiting for players to dab, to shoot on them and get them out for 30sec.

so I can consider myself as lucky

Thanks for opening up this topic and for clarification of the rule!